Mapeza: 'Who Heard Me Saying I Cannot Work With Benjani?' 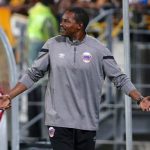 Warriors coach Norman Mapeza said he needs to talk to the Zimbabwe Football Association (ZIFA) before he makes a decision on his backroom staff ahead of the Africa Cup of Nations finals early next year.

Speaking to Chronicle, the FC Platinum coach also rubbished claims that he did not want to work with former Warriors captain Benjani Mwaruwari as one of his assistants saying those making the allegations should prove that he said so. He said:

At the moment I still need to discuss a few issues with ZIFA before we can talk of who will be who in the setup, we still have other things to finalise then I can proceed from there but for now, I can not.

I suspect we have people who have sinister minds who look and see themselves as kingmakers on national team issues but sadly some of us are clear, this is Zimbabwe, our nation.

The whole nation can’t suffer just because we need to please a few individuals.

During the duration of his four-match contract, Mapeza picked Mandla Lulu Mpofu and Taurayi Mangwiro as his two assistants and Energy Murambadoro as the goalkeepers’ coach.

Mapeza will become the fourth coach, all local, to take charge of the national team at the AFCON finals after Charles Mhlauri, Sunday Chidzambwa (twice) and Callisto Pasuwa.