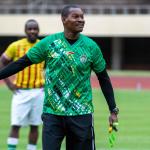 Warriors interim coach Norman Mapeza has retained the pair of Taurai Mangwiro and Mandla Mpofu as his assistants as well as goalkeepers’ coach Energy Murambadoro ahead of Zimbabwe’s Africa Cup of Nations finals campaign in Cameroon next month.

This means that Mwaruwari will work alongside Mangwiro and Mpofu as Mapeza’s assistant coaches.

The ZIFA board was suspended by the Sport and Recreation Commission (SRC) on 16 November and since then, the ZIFA secretariat has been running the football association’s affairs.

On Saturday, the secretariat confirmed that Mapeza had retained his assistants for the Cameroon tour of duty. It said:

Norman Mapeza is coming back with the technical team he worked with during the World Cup qualifiers and Benjani Mwaruwari is coming in as the third assistant coach by virtue of him being the recommended Under-23 coach.

Mwaruwari is already in the country and is expected to join his colleagues when the AFCON camp begins in Harare on 23 December.

Meanwhile, several players will not be considered for the AFCON finals, among them Tendayi Darikwa, as well as Marshall Munetsi and Brendan Galloway who are injured.

Leicester City’s youth player, Tendai Masvanhise is yet to get a Zimbabwean passport while Khama Billiat recently announced his retirement from international football.

US$8.00 Chitungwiza
Talent 5 months ago