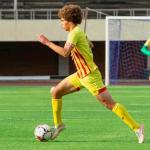 Mapeza was full of praises for the Hamburger player saying, given the opportunity, he will discharge the potential inherent in him.

With a little bit of luck, Fabisch could have ended the game with an assist but David Moyo, having been fed perfectly, was indecisive. Mapeza said:

We obviously had to give him (Fabisch) a chance. He is committed and very well focused. He is also a good footballer and he has a lot in terms of potential as well.

He gave us a good shift. He is a fighter and he hardly loses the ball. But, his introduction should be gradual. We had to give him some minutes and he showed what he is capable of doing. He can become a top, top player for us in the future. You guys saw him and it’s up to you to judge. He has the potential and we can bank on him. But what is important is the process, which should be gradual.

We need to incorporate him into the system in a gradual manner and that way he can learn and eventually become a top player he should be.

The 20-year-old son of the late former Warriors coach, Reinhard Fabisch, said his debut for Zimbabwe was not exactly what he had expected given the team dropped the points which looked very much in their grasp. He said:

Dropping off points is something which is very disappointing especially at home.

We were looking at winning this final match against Ethiopia to try and get the confidence we need going forward.

We need to win to restore our pride as a nation. But well as a player, I am happy with how I performed although I feel I should have done a lot better in some of the aspects of the game.

Fabisch who is considered one of the Warriors’ future said he was still adapting adding that he was grateful to Mapeza for giving him the chance.

US$4.00 Harare
Baba vaChatunga 6 months ago