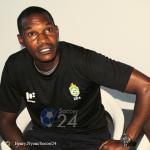 Warriors coach Norman Mapeza was happy with his charges’ performance despite losing 0-1 to Bafana Bafana in a CAF 2022 World Cup qualifier played on Thursday night at the FNB Stadium in Johannesburg, South Africa.

The win extended South Africa’s lead in Group G after Ghana dropped points in a 1-1 draw with Ethiopia earlier on Thursday.

The Warriors are now a massive 12 points adrift of Bafana Bafana, having lost four World Cup qualifiers on the bounce, a record on its own.

But Mapeza believes the Warriors are heading in the right direction as far as rebuilding the national team is concerned. He said:

It’s unfortunate the team ended on a losing note but I am proud of my boys. They played so well and we could have scored on two or three occasions but at the end of the day, it’s about getting goals.

It was a good match for my boys but we were unfortunate not to have scored on some of those occasions. We are in the right direction as far as rebuilding is concerned.

We gave an opportunity to an 18-year-old (Bill Antonio), we will continue doing that.

I am happy with the way we expressed ourselves.

It’s a game of football and we picked a lot of positives, at the end of the day.

The only goal of the match came via a Tebogo Mokoena header from Keagan Dolly’s cross in the 26th minute.

Meanwhile, the South Africans have won their last four matches, in the qualifiers, and now need just a draw, in their final match in Ghana on Sunday, to make the final round of qualifying matches.

@Titi why give Mapeza time, instead of giving Zimbabwe time to change the face of our own football.The same Mapeza was recruited in midst of desparation and also he is a Zimbabwean club coach brimmed with his own pressures.Zifa must eye the likes of Benjani now because later is too late.Peter Ndlovu has done good works outside Zimbabwe, he must be considered as the head Coach,paid well and i tell you those two,Peter and Benjani are good scouts of classical talent based on their natural tallented skills.Change cards Zimbabwe!

Mapeza must hit the dust,leave this to someone else and i'd suggest Benjani Maruwari.Some might be impressed by the standard of play which yielded no better results at the end.We are not empressed by fancy styles ,but we want a team with a perfect strategy and with good finishers like what South Africans implemented at the 26 minutes,from nowhere and unexpectedly it was a goal.
Zimbabwe lets try classical coaches ,the home legends and the former goal scorers themselves.Our own Zinedane Zidane's and that is the new blood ,the silent killers..There are as follows.
@Peter Khathazile Ndlovu Head Coach
@Benjani Undertaker Maruwari Ass Coach
@Tinashe Father Nengomasha Tech Advisor.
The Government must be ready to lose more money to get these 3 gentleman together in order to change the face of Zimbabwe football.
@Charles Mabika its high time he sits on the ZIFA chair,he's got football at heart.

That was much much better Mr Mapeza compared to their recent previous perfomance. Hopefully their financial issues are going to be well handled this time

IT IS TRUE THAT COACH NORMAN MAPEZA IS REBUILDING THE WARRIORS BRAND BECAUSE WE HAD ABOUT TWO OR THREE REGULAR PLAYERS ONLY IN THAT TEAM.

THE BIGGEST PROBLEM ZIMBABWE HAS IS THAT OF THE COACHING DEPARTMENT. WE CHANGE COACHES TOO FREQUENTLY. EACH COACH WILL BRING HIS TECHNIQUES, METHODS AND FORMATIONS.

I ADVISE ZIFA NOT TO HURRY WHEN EMPLOYING COACHES. THEY SHOULD VET THEIR COACHES THOROUGHLY BEFORE ENGAGING A COACH AND MAKE SURE THAT COACH GETS TO KNOW HIS PLAYERS WELL. IT IS NOT PLAYERS ONLY WHO JELLY WITH EACH OTHER. COACHES ALSO JELLY WITH THEIR PLAYERS AND OTHER MEMBERS OF THE TECHNICAL DEPARTMENT, THEREFORE THEY NEED MORE TIME WITH THEIR PLAYERS.

Thanx mapeza that goal was because of the reluctant of our defenders, but mhari shows that can do it

We are always loosers