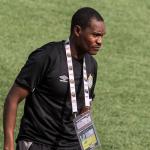 Warriors coach Norman Mapeza gave the squad a day off on Tuesday following the energy-sapping and frustrating 1-0 defeat to Senegal on Monday.

The squad just did some recovery exercises and spend the greater part of the day relaxing at their hotel ahead of their Group B second match against Malawi on Friday.

Mapeza, who also doubles as FC Platinum coach, was satisfied with the back four’s performance against Senegal but believes the strikers should have done more with the half-chances that fell their way. He said:

Today (yesterday) we have given the team a rest as we just did recovery training.

I thought there were a lot of positives from the game against Senegal (on Monday). Defensively, we did well.

I think Petros (Mhari) did very well and you also look at the two centre-backs Gerald Takwara and Teenage Hadebe.

Chimwemwe (Takudzwa) and Bhasera (Onismor), who were also playing in defence, gave a good shift as well, so in terms of the defensive formation, I think we were spot on.

The midfield was also fine, Madzongwe (Kelvin) and Benyu (Kundai) were also impressive and Knowledge (Musona) did well.

But, look I have always been telling the players that in modern football, you don’t create too many clear-cut chances.

Instead, you have to fully maximise on the half-chances that you get. We have to work on our conversion rate.

We need goals to win matches and I believe we will get it right at the end.

The Senegalese had some tall centre-backs and we didn’t deliver too many crosses as we thought it would lead to loss of possession unnecessarily.

After matching the Lions of Teranga man for man for 94 minutes, the Warriors conceded a last-gasp penalty that was converted by Liverpool forward Sadio Mane.