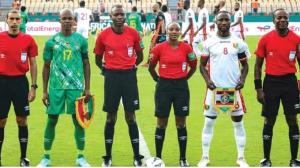 Warriors coach Norman Mapeza has commended the Confederation of African Football (CAF) for appointing a female referee in Zimbabwe’s 2021 African Cup of Nations Group B match against Guinea (AFCON) on Tuesday evening.

Rwandese referee, Salima Mukansanga (35), became the first-ever female referee to take charge of a match at the AFCON finals.

Previously the Mukansanga was the fourth official when Guinea defeated Malawi in another Group B match on 10 January in Bafoussam.

Mapeza said it was his wish to see other female referees officiating at major tournaments such as the FIFA World Cup. Said Mapeza:

I think it was good (having a female referee) and I think she did very well. Games for men are always difficult.

Tempers run very high but I think that lady did very well and I think it’s a big achievement for CAF for giving a lady an opportunity to be the centre referee for the game.

My wish is now to see other female referees officiating at other bigger tournaments like the World Cup but I think they (CAF) did very well to assign that lady for our match.

We saw a good match. We played well, unlike the matches against Senegal or Malawi. I would like to thank my players who controlled the game, especially during the first half.

In the second half and after having conceded a goal, my players who lack experience were somewhat unsettled.

Frappart, who was also 35 at the time, became the first female official to take charge of a major UEFA men’s competition event. She was assisted by Manuela Nicolosi and Michelle O’Neal

US$0 Harare
Jah Bee 4 months ago