Mangudya "Smells" Success At The Reserve Bank Of Zimbabwe 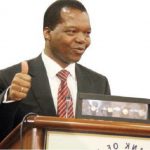 Reserve Bank of Zimbabwe (RBZ) Governor John Mangudya believes he has been very successful in both his first snd second terms as Central Bank boss.

Mangudya’s first term of office ran from 2014 to 2019. This was when the RBZ introduced bonds notes and attempted to de-dollarise the economy.

Speaking on Alpha Media Holdings chairman Trevor Ncube’s programme, In Conversation with Trevor, Mangudya said he has managed to tame inflation from 87% in July 2020 to 58% in November 2021. He said:

The first term of office, 2014 to 2019. It was a period where Zimbabwe was using dollarisation as a means of economic set-up.

Therefore, the impact of the monetary policy was not felt much in the economy because we were using dollarisation for most of the term, 2014 to 2018.

We only removed dollarisation in 2019.

Therefore, you will find the first term of office we had deflation.

Whilst lots of people want dollarisation, but we had deflation most of the part of my first term, it only ended in 2017 after we introduced the currency of bond notes in 2016.

The whole idea there was to ensure that we pump up the economy, we inject some liquidity in the economy, that is what happened, of which by that time the first term was so different from the second term.

The second term is basically where we have our own local currency as our functional currency and, therefore, the impact of the monetary policy and its transmission is now being felt in the economy.

Therefore, our success during this second term is basically that we have managed to reduce inflation from the 87% in July 2020, down to 58% now in November 2021.

That combination, that strong coordination between the two, fiscal and monetary policies by the government and central bank helped the economy to be where it is today.

So yes, today we can say we are smelling success of our coordination of policies, which is what any country should do.

US$125.00 Harare
Confucius🙄Confuse-us 5 months ago

Success doesn't need to be smelled.....it self evident...stop taking us for fools & embarrassing us

kkkkkliwe Mangudya Zimbabweans are the most educated people. What did you achieve???? nema BOND. People ignored you and are using US$s everywhere. Mabond ako are a disappointment. Tangomirira kuti US$ ive mari ye Zimbabwe. ZVEMA BOND AKO AYO ZVARAMBA.