Mangudya Ranked Among The Worst Central Bank Governors In Africa 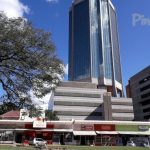 Reserve Bank of Zimbabwe (RBZ) Governor, John Mangudya, has been ranked among the worst central bank governors, according to rankings by Global Finance magazine.

The magazine annually grades the world’s leading central bankers based on a series of metrics, including the appropriate implementation of monetary policy.

Since his appointment as the RZB chief, in March 2014 by the then president, Robert Mugabe, Mangudya has failed to tackle Zimbabwe’s financial chaos characterising the country’s monetary sector.

Zimbabwe has faced a runaway exchange rate and cash shortages, and this has eroded public confidence in the banking sector.

The highlight of Mangudya’s tenure, so far, is the introduction of bond notes which he claimed were at par with the US dollars.

Speaking to Fin24, a Zimbabwean CEO with a large manufacturing company expressed concern over the monetary mismatches obtaining in the economy. He said:

There is no confidence in the banking sector, inflation remains problematic and the exchange rate is far divorced from the parallel market despite advice from IMF for convergence.

He cannot be among the best governors with the state of the economy and monetary sector.

Global Finance gave Mangudya a score of “C” for 2021, signifying one of the worst scores for the African continent and only below Namibia, Mauritania and Madagascar which have scores of “D”.

This was, however, an improvement from 2020 when the magazine gave Mangudya a “D” grading.

With inputs from analysts, economists and financial editors, Global Finance each year grades the world’s leading central bankers on a scale of A to F.

Isnt there a difference between the worse and the worst? If there is, he is among the worse not the worst D, E and F. Though he has improved its a drop in the ocean considering our situation here, we need the best A+

Can someone show Dr. Nostro his Annual Performance Report and ask him to do the most noble thing under these circumstances. (Anozviziva)

John Mangudya is trying his best, but the illegal economic sanctions have proved to be the major stumbling block to a meaningful progress. USA and Britain alongside its allies must now have mercy on Zimbabwe, tatambura veduwe 😖😖😖

Some ppl like AGRO dont even know anything, for record purposes, RHODESIA under Ian Smith was under OIL SANCTIONS, which was mearnt to bar her from,importing oil & oil products. Saka baba chimbo nyararai kana musina chamuno ziva manzwa ka

Mese muri madofo kana akapiwa D last year this year opiwa C next year its a B then an A. On a scale from A-F kure ndekupi,from C-F or from C-A?
his score actually reflect that he is improving annually

well its not obvious that he is getting a B next time...he might go to F