Mangudya: I Empathise With The People Of Zimbabwe 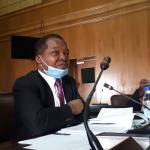 Reserve Bank of Zimbabwe Governor John Mangudya said Zimbabwe has a single currency, the Zimbabwe dollar, and there is no currency called RGTS or Nostro.

Responding to Alpha Media Holdings chairman Trevor Ncube on the platform In Conversation with Trevor, Mangudya said the Zimbabwe dollar was the country’s sole currency.

Ncube has asked the central bank chief to shed light on the identity of local currency as traders use various terms such as EcoCash, Nostro and bond, among others. In response, Mangudya said:

So there is Nostro, and such because people are perhaps too educated they use all kinds of acronyms.

Asked by Ncube if he was not worried about presiding over an economy where so many acronyms are used, Mangudya said:

It does not worry me, because there is diversity in Zimbabwe.

As long as we speak the same language, I know when they are referring to the RTGS, they are talking about the Zimbabwe dollar.

Maybe from this conversation, we need to change the narrative.

The narrative of our local currency is called the Zimbabwe dollar, and the foreign currency that we are using here, we normally use the US dollar, rand or British pounds, but predominantly in the market there is the US dollar, that is what is being used.

The other currencies can be accepted. There is nothing called Nostro.

Nostro, these are accounts for banks in foreign banks, these are foreign currency accounts.

Nostro means our account with you in a foreign bank.

The opposite of Nostro is Vostro, which means their account in our box.

So, the term Nostro, what they are referring to because you still remember we had a virtual US dollar and money that was physical money in the Nostro accounts.

I know what they are referring to.

It does not bother me because I know exactly what they are saying, but for purposes of this conversation, it is local currency, foreign currency accounts and foreign currency.

In a professional govt Mangudya would have been fired a looong time ago. He is never in touch with reality

Reply Report Abuse
But 5 months ago

We certainly have no single currency in Zim but a lot of is confusion kuRBZ. The multiple rates being charged on the 'different' local currencies is testimony to that. VaMangudya, you can fool some people sometimes but you can't fool all the people all the time.

How can it be the same thing kana imwe mari iri ye mu 4n ine rate yayo imwe its in the card also with a different ratings the boom another one in papers with another rate then you come to admire kuti zvino fanana papi gudo,tsoko,ne gorrilla zvese izvi its a familly of different cultures papa .pliz try to be serious and say the truth as it is muno mu Zim we are having multiple forms of currency

🤣🤣Everyone in the comment section confused.That guy is dangerous.

@Chapwititi: Taura, this guy is confusing us. He is confusion on his own