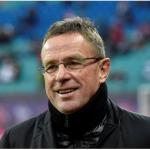 Manchester United has named Ralf Rangnick as interim manager until the end of the season, the Premier League club announced on Monday, eight days after sacking Ole Gunnar Solskjaer.

The 63-year-old German steps in to replace Solskjaer, who was removed after United’s 4-1 defeat by Watford this month, their seventh loss in 13 games across all competitions which left them eighth in the Premier League standings. The club said in a statement:

Manchester United is delighted to announce the appointment of Ralf Rangnick as interim manager until the end of the season, subject to work visa requirements. Following this period, Ralf and the club have agreed that he will continue in a consultancy role for a further two years.

Rangnick, who joins from Lokomotiv Moscow, takes over from first-team coach Michael Carrick, who has been in charge for two matches since Solskjaer was sacked. Said Manchester United’s Football Director John Murtough:

He was our number one candidate for interim manager, reflecting the invaluable leadership and technical skills he will bring from almost four decades of experience in management and coaching.

Rangnick, a former RB Leipzig boss, said he was excited about joining Manchester United and focused on making it a successful season for the struggling club. He said:

The squad is full of talent and has a great balance of youth and experience. All my efforts for the next six months will be on helping these players fulfil their potential, both individually and, most importantly, as a team.

Beyond that, I look forward to supporting the club’s longer-term goals on a consultancy basis.

Rangnick has been an influence on managers like Chelsea’s Thomas Tuchel, Bayern Munich’s Julian Nagelsmann and Liverpool’s Jurgen Klopp.

He has experience as a sporting director and first-team manager – particularly within Red Bull’s network of clubs with roles at Salzburg and Leipzig. Before then, he won the German Cup with Schalke in 2011 when he also reached the semi-finals of the Champions League.

That guy chibaba...he is the Godfather of heavy pressing football

I apologize to all Man Utd fans for letting you down during my tenure.But I am not sure wether my replacement will make the grade.

The invasion of England by the Germans, part 2.

Kkk haha it's a revolution one can't run away from. The Germans are making English football more enjoyable 🤗