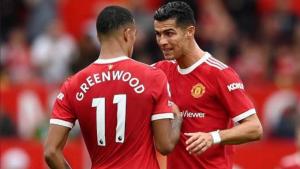 Manchester United forward Mason Greenwood has been arrested and remains in prison following reports that he raped and assaulted a woman.

The initial posts have since been deleted, but they have already spread on social media. Manchester United released a statement following the reports:

We are aware of images and allegations circulating on social media. We will not make any further comment until the facts have been established. Manchester United does not condone violence of any kind.

Manchester Police said it is “aware of images and videos circulating on social media.” Police also announced a man has been arrested following the allegations but did not outright state it was Greenwood.

The 20-year-old is in his third full season with Manchester United, scoring 22 goals across 83 appearances in the Premier League. He has made 16 EPL starts for the club this season and currently ranks third on the team with five league goals.

The England international signed an extension last February that kept him under contract through 2025.

Some of his teammates including  Cristiano Ronaldo, Paul Pogba, David De Gea, Marcus Rashford and Jesse Lingard have unfollowed him on social media platforms such as Twitter and Instagram.

what the actual fuck ?

English please,we are sick and tired of only Shona comments.

Not everyone has a good command of english language brother.
besides we are Africans why trouble ourselves with a foreign language instead of using our native languages like shona, ndebele etc.

Shit anyura manje he was young and promising in football carrier