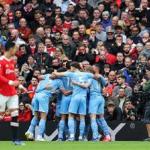 This follows their 2-0 victory against the Red Devils at Old Trafford on Saturday which gave them both bragging rights and the much needed three points.

The Cityzens got their first goal from Eric Bailly who clumsily intercepted João Cancelo’s cross to divert the ball into his own net.

Manchester City won four of the eight wins before the arrival of Pep Guardiola while the other four were recorded after the Spaniard’s arrival. Below is a list of teams that have recorded the most Premier League wins at Old Trafford.

Meanwhile, the result piles pressure of Manchester United coach, Ole Solskjaer whose team has been failing to produce better results despite the arrival of big names including Cristiano Ronaldo, Jodan Sancho and Raphael Varane.

The Red Devils’ defeat was another encounter to reinforce just how far Manchester United has slipped behind the Premier League’s elite as it comes two weeks after falling 5-0 at the hands of Liverpool.

We are the cityzens