Man Shares House With Mutare Family For Months Without Being Noticed 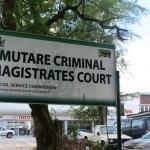 A homeless 19-year-old man lived in the ceiling of a house in Hobhouse Suburb, Mutare, without the knowledge of the occupants for almost two months.

The man, Tinashe Mlambo’s luck finally ran out of him when he made noises that led to his arrest recently.

The matter came to light when he recently appeared before Mutare magistrate, Prisca Manhibi charged with unlawful entry into premises as defined in Section 131 (1) of the Criminal Law (Codification and Reform) Act, Chapter 9:23.

Mlambo pleaded guilty and was sentenced to 14 months imprisonment.

However, six months were suspended for the next five years on condition of good behaviour.

He will serve eight months in prison.

Prosecuting, Tafadzwa Chiwanza told the court that Mlambo, who is of no fixed aboard, unlawfully entered into the Hobhouse home without permission or authority from the owner, Prosper Zimunya.

She said Mlambo, just like he did in the last two months, gained entry into Zimunya’s house through the garage while the family was watching television.

Zimunya heard some strange sounds from the ceiling and took a ladder to investigate.

He checked what was happening, only to find Mlambo hiding in the ceiling.

A report was made at Hob House Police Base, and Mlambo was arrested.

Mlambo told the court that he would sneak into the house in the middle of the night to eat before leaving in the wee hours.

He said he stole items such as cellphones and chargers without being noticed during his two months’ stay in the ceiling.