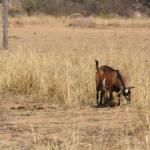 A Rusape traditional leader fined a local man two goats and US$55 after he found him guilty of accusing his elderly neighbour of bewitching his mother who is now late.

Chief Makoni presided over a case in which Russell Murembe of Nyahukwe Village also accused Gogo Maria Gowora of causing his wife’s infertility.

The US$55 that Murembe was ordered to pay by Chief Makoni’s court was the restitution for a similar amount the complainant used to process court papers.

Gogo Gowora told the court that she was living in fear of death after Murembe stormed her home, armed with an axe and threatened to cut her to pieces. She said:

I was at my homestead going about my daily chores when Murembe came armed with an axe, threatening to hack me for bewitching his mother. I have been living in fear since he threatened to strike me with the axe.

I knew his mother very well. I treated his mother as my daughter-in-law. His mother was sick for a very long time and died in 2003.

She was very sick and I tried to explain all this to him, but he insisted that I was the one who bewitched her.

As if that was not enough, he came up with another accusation that I am the one preventing his wife from conceiving.

She said sometime in 2018, she went with Murembe’s wife to a nearby mountain to fetch firewood and came across a fertility-enhancing herb. Said Gogo Gowora:

l recommended it to her and plucked part of the plant and chewed on it as proof that it was not poisonous.

I picked gavakava (aloe) and recommended it to his wife so that they would drink it together. I did it in the hope that it would help her conceive.

I chewed part of the plant in the presence of his wife. Now he is accusing me of giving his wife a poisonous plant to kill him.

Murembe denied ever accusing Gogo Gowora of witchcraft saying she was not happy with the fact that she gave his wife some herbs as this made it appear as if she was responsible for her infertility.

Murembe’s wife, who was in the gallery, exonerated Gogo Gowora, saying she gave her the herb out of genuine concern.