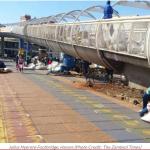 A Harare man slipped and fell on Tuesday while posing for some photographs at Julius Nyerere Way footbridge.

Vincent was attended by paramedics before he was rushed to Parirenyatwa Group of Hospitals.

Speaking after he fell, Vincent who sustained head injuries during the fall said:

I was posing for some photographs when I slipped from the footbridge.

Meanwhile, his photographer is alleged to have disappeared from the scene soon after the incident happened.

He is, however, believed to have climbed up the rails before he fell.

According to a local tabloid, a number of people who witnessed the incident allegedly did not offer to assist Vincent or call the ambulance considering the gravity of his injuries.

Instead, scores of people reportedly chose to turn to their phones and took turns to record Vincent whilst he was suffering in pain.

Vincent only started to receive assistance after one of the good samaritans called his wife who later called the paramedics and the ambulance.

He is currently recuperating at Parirenyatwa Hospital.