Man Digs Up Mother’s Grave, Claims She Was Buried Alive 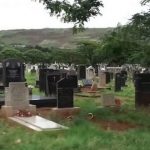 A Mwenezi man has been arrested after he dug up his mother’s grave claiming that she was buried alive.

He told his captors that his mother Miriam Magwegwe was appearing to him in his sleep and telling him that she was buried alive.

Gumbo said that his mother also instructed him to exhume her.

The mother died a few months back.

Prosecutor Leyton Katsidzira told the court that on 3 October 2021, Gumbo proceeded to Magwegwe’s grave and dug it out to a depth of 1.4m.

Villagers who saw him reported the matter to the police leading to his arrest.

The court ordered him to be examined by two doctors as it is suspected that the accused is mentally challenged.

Kkk Not yet more to come

It's hard to accept that your loved mom has been buried dead, the court must take that into consideration

This man had failed to come to terms with the fact that her mother is no more. Some people cannot cope with death of a loved one. The courts must also take this into account