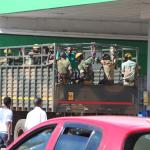 A man of no fixed aboard appeared in court on Monday on allegations of attempting to disarm a security guard at Vice President Constantino Chiwenga’s house in Harare.

The accused, Sani Munyaradzi Musena claimed that the house belonged to his uncle, the late former President Robert Mugabe.

Musena was not asked to plead to attempted robbery when he appeared before magistrate Tafadzwa Miti.

He will remain in custody for psychiatric evaluation and will appear in court again on 7 January 2022.

The State opposed bail saying Musena was likely to go back to Chiwenga’s residence as he thought he had a right to do so.

Prosecutor Anesu Chirenge said there is overwhelming evidence against the accused as he was arrested while wrestling with the guards and also he was of no fixed abode.

Musena told the court that the house where he was arrested belonged to his uncle, the late former President Robert Gabriel Mugabe. He said:

I was just walking and I stay at White House in (Borrowdale) Brooke. It is my uncle R. G. Mugabe’s house.

The State applied for Musena to be examined by two doctors under the Mental Health Act.

Miti granted the State’s application and ordered Musena to be examined by two Government doctors to ascertain his mental status.

Allegations are that on 18 December, Musena went to Borrowdale where Tinashe Mandaza, a soldier attached to Presidential Guard was on duty at Vice President Chiwenga’s residence.

While Mandaza was doing his routine perimeter checks outside the yard armed with an AK47 assault rifle, he saw the accused person walking along Hellensvale Drive towards the Chiwenga’s house.

Mandaza called Musena and asked him to move on after he stopped suddenly in the middle of the road.

However, Musena leant against the precast wall to the Vice President’s house and told Mandaza that he wanted a cigarette.

Mandaza then asked him to leave but Musena refused and then wrestled with Mandaza trying to disarm him.

Mandaza called for reinforcement, which resulted in Musena being apprehended without anyone being hurt.