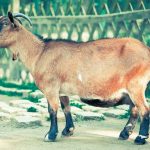 Police in Chiweshe are hunting for three male villagers who allegedly assaulted a suspected goat thief to death on Saturday.

Denmore Taruvinga, Henry Chaparadza and Aluwis Chigure are on the run in connection with a murder case after they allegedly assaulted Jokonia Makumbe to death, accusing him of stealing a goat.

I can confirm a murder case in Chiweshe where three male adults assaulted the now deceased Makumbe with logs and open hands thereby killing him on the spot.

We are appealing  for information  which can lead to the arrest of the suspects.

It is alleged the trio teamed up after receiving a tip-off that the deceased had stolen their goat.

They picked him at a certain homestead where he was drinking beer and dragged him to his home while beating him up.

Upon arrival, they searched his homestead for goat meat at the place and could not find any.

They further dragged him away from his house and fatally assaulted him.

The body of the deceased was found soaked with blood by his brother Paradzai Magwede who filed a police report.

Surprisingly, the missing goat was found in the bush tied to a tree.

Police warned members of the public not to take the law into their own hands by discharging instant justice.