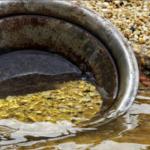 The Zimbabwe Republic Police (ZRP) has arrested a man who was in possession of 05 x 50kgs sacks of pregnant carbons which are suspected to have been stolen. The arrest happened in Gwanda, a gold mining town in Matabeleland South. Pindula News presents a police report on the case:

On 03/01/22, Police in Gwanda arrested a man (27) for possession of 05 x 50kgs sacks of pregnant carbons which are suspected to have been stolen. The suspect was intercepted at a roadblock while driving a blue Honda Fit vehicle AEQ 6832 with three passengers on board.

The passengers fled from the Police. Investigations are underway.

In the gold industry, activated carbon is used to recover gold from the gold-cyanide complex also known as the cyanide process. It is a technique for extracting gold from low-grade ore by converting the gold to a water-soluble coordination complex.

This case comes barely a month after armed robbers pounced on Atlas 16 Gold Mine on 8 December and got away with 130kgs of pregnant gold carbon worth about US$62 000.

ZRP said eight robbers who were armed with knives and iron bars attacked two security guards who were on duty at the mine and tied them with barbed wire before proceeding to the gold carbon room where they stole the pregnant gold carbon.

Cases of armed robbery in the mining sector have been rampant since around 2019 when machete gangs terrorised the sector.