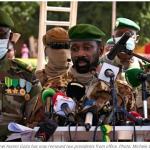 Mali said on Friday it would give airlines three days to confirm they will continue flights to the country or lose their landing slots after several carriers suspended service in response to sanctions being imposed on the military-led government.

Regional carriers, including Air Cote d’Ivoire and Air Senegal, and Air France suspended flights to the capital Bamako indefinitely this week after West Africa’s main political bloc ordered its members to close their borders with Mali.

The sanctions, which also included the suspension of non-essential financial transactions, were issued in response to a proposal by Mali’s transitional government to delay democratic elections originally scheduled for February by up to four years.

Mali’s transportation minister wrote in a statement that airlines would have 72 hours from Saturday to confirm to civil aviation authorities whether they intend to continue service. The minister, Dembele Madina Sissoko, said:

Beyond this time, their time slots will be attributed to other airlines in order to ensure a continuity of service.

A transitional government has been ruling Mali since a military coup in August 2020 that ousted President Ibrahim Boubacar Keita.

The junta’s leaders agreed to oversee an 18-month transition culminating in democratic elections in February 2022 but have since backtracked, citing insecurity caused by Islamist militants and logistical constraints.