Malawi Qualifies For AFCON Knockout Stage For The First Time 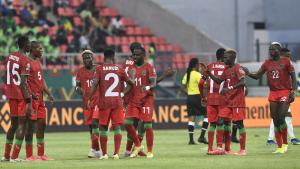 Malawi has qualified for the knockout stages at the 2021 Africa Cup of Nations (AFCON) finals currently underway in Cameroon as one of the best third-placed teams in the six pools.

Wins for Egypt and Nigeria in Group D on Wednesday ensured the Southern African country would be among the top four teams no matter what happens in the final matches in the first stage on Thursday.

Malawi has reached the knockout stages for the first time in the history of the tournament after beating Zimbabwe 2-1 and holding pre-tournament favourites Senegal to a 0-0 draw.

The Flames will now face Morocco in the second round in Yaounde on Tuesday.

Three nations from the Council of Southern Africa Football Associations (COSAFA), that is, Zimbabwe, Malawi and Comoros qualified for the 2021 AFCON finals.

Comoros still has a chance to reach the knockout stages but Zimbabwe is already out of the tournament after losing to Senegal and Malawi.

To their credit, the Warriors signed off with an excellent 2-1 victory over Guinea on Tuesday.

So their short lived showcase ends on Tuesday.You did your best guys thanks for representing us well.Zimbabwe 5 attempts but still can't get through to the last 16.