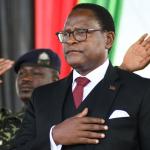 Police in Malawi yesterday fired teargas to break up an anti-government protest over alleged corruption and economic mismanagement by President Lazarus Chakwera’s administration.

Hundreds of Malawians poured into the streets in Blantyre to demand that Chakwera’s administration act on its election promises that included creating 1 million jobs and ending hunger.

We are into the second year and there are still no jobs. The promise of three meals a day has failed to materialise, and instead, prices of fuel, food and cooking oil have skyrocketed.

Friday’s protests reportedly turned violent as a pro-government group also moved in to stop the march across the city.

Some businesses and government buildings were closed as a result.

Chakwera in June 2020 unseated former leader Peter Mutharika in a re-run election after he pledged to curb corruption and rebuild the ailing economy.

But Malawi’s consumer price inflation rose to 9.8% year on year in October from 8.9% in September.