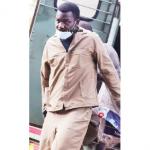 The former Students Unions’ leader was on Wednesday granted bail but remains in prison as it emerged that he is yet to secure bail for another case in which he is accused of kidnapping.

He had secured bail following a successful appeal at the High Court in a case in which bail had been revoked by a Harare magistrate. Said his lawyer Simon Chabuka:

He has another pending case for kidnapping. The impala case were they demanded the release of Ngadziore (Takudzwa), another activist. We will be making a fresh bail for him tomorrow (Thursday). The matter is likely to be set down on Monday or Tuesday.

Chabuka says what is surprising is that the facts in a case he is being held for remain the same as the facts in the case he has been granted bail for. Chabuka added:

Circumstances and complainant’s remain the same so as his lawyers we feel it is just an unnecessary split of charges only aimed at keeping him inside.

Makomborero has been in jail for the past nine months after his bail was revoked for skipping court.

He has several criminal cases yet to be finalised.

US$0 Harare
Shadows 5 months ago

Shall come to pass,Africa Africans.

If you are into politics, especially in Africa, and you have never slept mukati kana kumbozviita area or even kumboiswa ngetani you are not a politician.