Majority Of MDC-T Provinces Back Mwonzora's Decision To Suspend Khupe 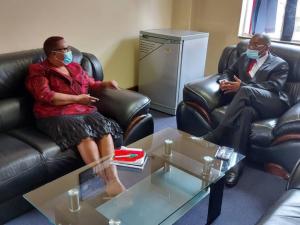 The majority of MDC-T political provinces endorsed the suspension of Vice President, Thokozani Khupe, while Matabeleland South and South Africa provinces announced that they back the former deputy prime minister.

They issued uniform statements Friday and Saturday pronouncing their support for party president Douglas Mwonzora, saying his decision to suspend Khupe was above board.

The party’s Women Assembly also issued a statement signed off by the organ’s information secretary, Lazwi Sibanda in solidarity with Mwonzora.

The Province wishes to distance itself from the press conference hosted by suspended Vice President (VP) Dr Thokozani Khupe, in Bulawayo earlier today. We are fully aware that she has been suspended from all party activities pending her appearance before the Abiter-General and his balanced disciplinary committee.

We urge our genuine MDC-T members, our MDC Alliance partners, and all Zimbabweans in general to totally ignore this unsanctioned event designed for the purposes of scoring cheap and temporary goals. We affirm the decision  of our party and President Douglas T. Mwonzora, to suspend VP Khupe.

The province went on to describe her as hostile in nature and recalled how she repeatedly fought with the late party founding leader, Morgan Tsvangirai and the MDC-T family.

A similar letter was reproduced by the other provinces.

Meanwhile, Khupe held a presser on Friday declaring that she was the new party leader adding that the MDC-T had split.

We might not like these two and it is clear enough neither of them will win an election. But even though Mwonzora is clearly a snake, akatsotsa Chamisa apa akatsotsa futi mai ava, pasi pazvo akuda kuvadzinga futi. I say ndavangodzosera zvavo Madam Khupe as the president of MDC-T coz she clearly deserves the position.

Well, zvadhakwa Amai well tried though i am not in your ship. Anyway keep trying hamuzo shaiwo a few that eill stand by you, Farewell Mama

I have no dog in this fight. But among the blind, the one eyed man is king. Among the MDCT's and their meagre supporters Mwonzora is king. He has the support of the majority of provinces and he was elected at their congress in December 2020. The presumption of constitutionality and presumption of legitimacy will favour him and his decisions if and when he approaches the courts. The onus is on Khupe to prove otherwise. I'm sure Khupe knew that the legal route is untenable and unsustainable thats why she opted for a split, which is not provided for in the MDCT constitution or the constitution of any other party for that matter. Mwonzora is treacherous but he is a wily fox when it comes to legal subterfuge. He taught me Roman and Roman Dutch Law at the UZ. I deapise him though, but evil as he is,he is also clever and cunning. I reckon Khupe and her cohorts will be recalled from parliament and Senate successfully and they will be barred from using the MDCT name. Yes there will be legal delays, but the matter can be tried on an urgent basis since all political parties are faced with impending by-elections... Me thinks Mwonzora is more useful to Zanu Pf than Khupe thats why ED hung her out to dry during abd after the Congress held in December 2020.

ON FRIDAY, 21 JANUARY 2022, DOCTOR THOKOZANI KHUPE DECLARED THAT MDC T HAD SUFFERED A SPLIT AND IN THE HISTORY ANNALS OF THIS COUNTRY IT SHALL BE ENDORSED AS A SPLIT. LADIES AND GENTLEMEN, A SPLIT NEED NOT BE CONSTITUTIONAL, LAWFUL OR REASONABLE. IT EMANATES FROM DISAGREEMENTS.

WHILE I WANT TO BACK GOOD DOCTOR THOKOZANI KHUPE FOR EXERCISING HER CONSTITUTIONAL RIGHT OF ASSOCIATION AND DISASSOCIATION, I WANT TO QUESTION HER POLITICAL DEALINGS.

SHE WAS ONCE MORGEN TSVANGIREI'S VICE PRESIDENT, SHE ENDED UP NOT IN GOOD BOOKS WITH HIM.

SHE WAS THEN NELSON CHAMISA'S VICE PRESIDENT. SHE REBELLED. AFTER THE LAST MDC T CONGRESS, SHE LOST TO ADVOCATE TOGARASEYI MWONZORA. MWONZORA OUT OF SHEER LOVE FOR HER, HAND PICKED HER FOR VICE PRESIDENCY. A FEW MONTHS DOWN THE LINE, SHE HAS REBELLED TO REGISTER A SPLINTER MDC T.

ALL THESE ACTS PROVE THAT MY GOOD DOCTOR IS NOT A GOOD POLITICAL SUBORDINATE. SHE ALWAYS PLANS TO TOPPLE HER SENIORS.

ALTHOUGH I AM DISPARAGING HER TODAY, HISTORY HAS RECORDED HER AS AN MDC T FACTION LEADER UNTIL ADVOCATE DOUGLAS MWONZORA GOES TO COURT TO SEEK JUDICIARY ASSISTANCE.

Headless chicken you are correct;Amai Khupe is fast becoming a Ndebele political party.She wants to be in parliament,wether she wins elections or not