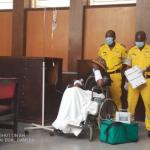 A Harare magistrate is today expected to make a ruling on whether the criminal trial of Vice President Constantino Chiwenga’s estranged wife, Marry Mubaiwa-Chiwenga, should commence.

This comes after two medical practitioners gave conflicting explanations on her health status.

Harare magistrate Lazini Ncube was supposed to make a determination on Monday afternoon but failed because of electricity outages that affected recording facilities at the Harare Magistrates Court.

The head of the psychiatric department at Parirenyatwa Group of Hospitals, Dr Fungisai Mazhandu, told the court that Mubaiwa was suffering from depression and anxiety. She said:

She is not currently able to stand trial. At the time that I saw her, she had difficulties in concentration.

She cannot fully follow and participate in court proceedings.

It is my opinion that Marry Mubaiwa has a mental disorder and is not able to stand trial.

Dr Mazhandu asserted that Marry’s mental disorder, that is depression and anxiety, could have been caused by separation from her children and physical illness.

However, Dr Charles Nyamukachi, head physician at Parirenyatwa Group of Hospitals, told the court that he examined Marry on 4 November and noted that she was fully alert and her level of concentration was normal. He said:

I was called by the clinical doctor to do a physical examination. On November 4, I examined 40-year-old Marry Mubaiwa and she was fully alert, oriented in time, person and place.

Dr Nyamukachi said most of the things he examined, including breathing, were normal although he noted that her hypertension was high.

He said the level of Mubaiwa’s hypertension could not deter her from fully comprehending trial proceedings.

Faced with two conflicting explanations from the two doctors, the State led by Michael Reza then applied that Marry be medically examined by two Government doctors on whether she is fit to stand trial or not.

Marry, through her lawyer Beatrice Mtetwa, opposed the State’s application and applied for the temporary release of her passport for two months.

Mtetwa also applied for the temporary relaxation of her bail conditions to allow her to travel to South Africa and India to seek medical attention.

Marry deserve no special treatment,let her taste what all other women in Zim ar enduring. What's good for a goose should also be good for the ganter

US$4.00 Harare
Chifinhuboss 6 months ago

Showing up with some paramedics in the court room is not a good sign, it shows that someone ain't physically fit to stand a trial. Unless its stage managed!