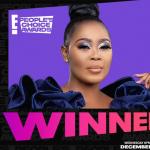 She’s a winner! Congratulations to Tyra Chikocho aka Madam Boss for winning the #AfricanSocialStar #PeoplesChoiceAward for 2021.

Thank you @eonlineafrica this is big for me and my fans

Zimbabwe we did it

Meanwhile, Dwayne The Rock Johnson is the People’s Champion at the 2021 People’s Choice Awards!

Congratulations congratulations to your Madam Boss, you have raised the Zim, Southern Africa Flag high. No one can dispute the fact that you are hotter than water in a Tea Kettle. All the best in your career🇿🇼Proudly Zimbabwean🇿🇼

This is big, for her really, congratulations to herself!!! Zimbos will rush to say ohh it was some toko losh

Guys let us not accuse people or tarnish people's images by saying things we don't have proof or evidence of. If you are put on the vice over these things zvamotaura about Madam Boss or MaiTT munozviziva here. Askana tisadaro nooo. No to Women's Abuse.

What does it benefit to gain wealth and fame,but to loose your soul,i smell a rat in this drama of Madam Boss.