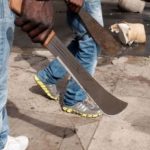 Four Tsholotsho men have been arrested for assaulting an elderly villager using a machete and rock boulders following a misunderstanding.

The Zimbabwe Republic Police (ZRP) confirmed the incident saying the incident happened on the 21st of December. Said the police:

The ZRP confirms the arrest of Mfowethu Sibanda (24), Bongani Mlingo (28), Buzani Sithole (18) and Thabane Dlodlo (19) in connection with a case of murder which occurred on 21 December 2021 at Simanje line, Tsholotsho.

The victim, Job Maphosa (66) struck Tafadzwa Kasirobi (23) with a machete on the head accusing him of being disrespectful. This did not go well with the suspects, who are Tafadzwa Kasirobi’s friends and they mobilised themselves to revenge the assault.

The quartet fatally struck Maphosa with a machete and stones all over the body.

Murder incidents are on the rise in Matebeleland North province, with a week hardly going by without recording a killing, particularly at beer drinking spots.