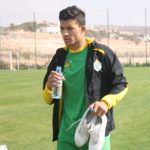 Macauley Bonne is expected to remain with his English League One side Ipswich Town for next week’s home game against Oxford United despite being named in the Warriors squad for their World Cup qualifiers against South Africa and Ethiopia this month, TWTD reported on Thursday.

The Warriors technical team led by interim coach Norman Mapeza recalled Bonne to the Zimbabwe squad announced this morning having been left out of the party for last month’s games.

He reportedly failed to travel for the Warriors’ back-to-back matches against Ghana because the matches were being played in countries on the UK COVID-19 red list.

According to TWTD, the 26-year-old is still unlikely to travel with nothing riding on the matches.

Zimbabwe are bottom of their qualification group having taken only one point from their four fixtures so far and are already out of contention for the finals.

Below is the Warriors squad for the matches against South Africa and Ethiopia: