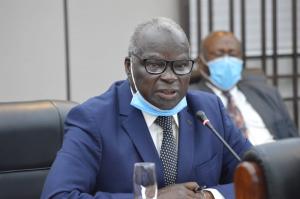 Local Government minister July Moyo has denied allegations that he is pressuring Masvingo’s local authority to surrender a huge piece of land to an Indian investor in a shady deal.

The company is said to have retrenched some of its workers in 2019 due to financial challenges and is now eyeing a multi-million-dollar project. Logistics Officer, Tabonga Gwerena declined to comment on the matter.

Minister Moyo told NewZimbabwe that he was not involved in the deal in any way. He said :

I’m not privy to that issue and have never interfered in issues of land allocation in Masvingo or anywhere else. What I am privy to is the promotion of business. Allocation of land is done by the local authority.

Sources at the Masvingo Town House said some councillors and management staff are vouching for the deal trying to please July Moyo despite warnings the deal could spook other investors and residents.

Reports say the company has rejected a 50-hectare lease offer from the council, maintaining the 200-hectare request which they demanded should come with title deeds to the land.

Recently some council officials were invited by the company where they were notified of how the company would want to utilise the land.

Masvingo mayor Collen Maboke confirmed that a request has been put forward by the company adding “we haven’t reached any decision.” He said the local authority “does not make rushed decisions and we do what is best for the city.”

The proposal comes when the city has a ballooning housing waiting list and a very poorly-performing Industry which they hope to revive by selling Industrial stands that fall within the land identified by the steelmaking company.