Links With Land Barons Worry ZANU Ahead Of 2023 Elections 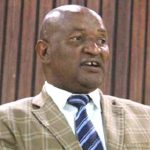 ZANU PF is concerned that allegations linking the ruling party with land barons could undermine its chances of winning the 2023 elections, a report by the ruling party’s national security department has revealed.

The department’s report was presented at the conference in Bindura last week. The department is headed by Lovemore Matuke. The report read in part:

The issue of land barons, especially in Harare and other urban centres has remained a thorny issue.

It has remained unresolved to the extent that there are boundary disputes, especially between Harare and Mashonaland East province, and they have created uncertainty as beneficiaries fear losing their residential stands gotten from land barons.

Land barons have gone scot-free and this has disheartened the electorate to a greater extent more so the majority of land barons are alleged to be members of the party.

The report also stated that the party was under siege from the “ever-scheming” opposition and Western countries that have allegedly revived the regime change agenda. It said:

In a nutshell, the regime change agenda is still much alive. Sensing imminent collapse owing to implosion within the MDC Alliance party in liaison with other detractors and with the assistance of some Western embassies intensified the narratives of legitimacy and economic crisis in Zimbabwe, and attempted to occupy the streets of all urban centres through protests, to make the country ungovernable and oust the ZANU PF government.

ZANU PF has over the years accused the MDC Alliance of working in cahoots with Western embassies to intensify negative narratives against the ruling party.

The report also accused the opposition of taking advantage of the economic crisis bedevilling the country and the “legitimacy crisis” to hold protests across the country whose objective was to dislodge ZANU PF from power. The report read:

Also cited was the aspect of economic challenges which detractors are terming an economic crisis whose gravity deserved intervention from international players.

The other narrative was that of ‘legitimacy crisis’ whose focus was for Zanu PF to engage a particular opposition party in order to reach an agreement that would see the conception of a ‘transitional government’ to take over from the ZANU PF government until 2023 harmonised elections.

This is despite the fact that the ZANU PF government is working with other opposition parties under POLAD (the Political Actors Dialogue).

POLAD brings together the majority of presidential candidates who participated in the 2018 harmonised elections by the major opposition figures, among them MDC Alliance leader Nelson Chamisa have refused to be part of the dialogue platform calling it “a charade”.

Especially in Chinhoyi, Givemore is one of those land barons