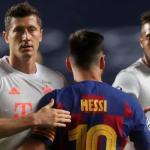 Bayern Munich striker, Robert Lewandowski has reacted to being snubbed by Lionel Messi in The Best FIFA award voting by claiming “I didn’t do anything wrong that he can be mad at me”.

The Polish striker took home the gong for a second straight year on Monday night despite being left out of the Paris Saint-Germain star’s top three.

The Poland international triumphed despite not receiving a vote from Messi, who won last year’s Ballon d’Or ahead of the striker.

Last year, Messi suggested that Lewandowski should have won the 2020 Golden Ball in his acceptance speech.

Lewandowski has admitted he was surprised not to make Messi’s final three after those words of praise, and hopes the Argentine’s decision was not fuelled by any personal issue.

When asked to address the contrast between Messi’s comments at the Ballon d’Or ceremony and his voting choices for The Best prize, Lewandowski told a press conference:

Those were very nice words from him. Now regarding his choice: the question has to be asked of him. I didn’t do anything wrong that he can be mad at me – except sporting things.

Privately, I hope everything was okay. That was his choice, I have to respect that. I don’t have to say anything negative or be mad.

Messi was included in Lewandowski’s top three, but only as a runner-up as he opted for Chelsea midfielder Jorginho as his preferred winner.

The Bayern forward felt that the Italian was more deserving of the accolade after winning the Champions League and European Championship honours, with Manchester United’s Cristiano Ronaldo coming in third on his ballot.

He said no explanation was needed on his selection of Messi and Ronaldo saying they show their best quality always.

Lewandowski went on to suggest that The Best award holds greater weight than the Ballon d’Or due to the fact the result is decided by only votes from players and coaches. He said:

Every award has different rules. For me, it is always most important when the players and coaches vote.

They know what it means to play at the top level. For me, that’s worth more than when there are no players and coaches.

Prizes with the team are the biggest. I’m mostly focused on those prizes.