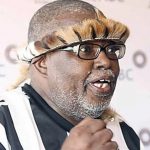 Legendary former Highlanders chairman Ndumiso Gumede has died. He was 75.

Details about his death are still sketchy, we will post an update once we have all the details.

He was also a former vice president of the Zimbabwe Football Association (ZIFA).

Gumede was born on 14 October 1945 in Bulawayo at the end of the Second World War.

He grew up in Mzilikazi’s R square 62. Gumede was the son of Sithelo Gumede and Elina Msimanga. Since his father was a teacher, he did his education at a number of schools in and around Bulawayo.

He served in football administration for a long time and has been in the Highlanders structures since the early 1970s as the representative in Harare. He was a divorcee since 1993.

I have nothing to say 🤭