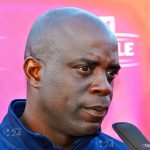 Referee Munyaradzi Majoni, who officiated Dynamos’ controversial victory over Yadah in their opening Castle Lager Premiership match of the season at the National Sports Stadium on Sunday, has come under heavy criticism for the way he handled the match.

Yadah felt it was a travesty of justice when Dynamos skipper, Partson Jaure, somehow escaped with only a yellow card following a high boot challenge on former teammate Godfrey Mukambi in the second half.

Jaure was involved in another controversial episode, with television replays showing he used his hand to block a goal-bound shot, in the 70th minute.

Majoni instead gave Yadah a corner kick despite strong protests from the Miracle Boys who wanted a penalty.

Yadah coach, Genesis Mangombe, was fuming throughout the match but Dynamos coach Tonderai Ndiraya told reporters after the match that in fact, Mukambi was supposed to be sent off before the Jaure incident. Added Ndiraya:

I thought the referee had a good shift today in managing the game. Otherwise, we could have seen more dismissals.

… It’s very normal when a team loses to make noise but in the end, things you can’t control, you cannot do anything about it.

The referee was in control of the match, so let’s give him his space and we must be confined to our jobs of coaching the teams.

My team won and we defended well against a barrage of attacks from Yadah, which is pleasing. We created and scored the only goal of the match today.

The only goal of the match was scored by Shadreck Nyahwa when he headed home a cross from Albert Eonde, just after the hour mark.

The victory ensured that the Glamour Boys did not fall behind the platinum clubs after FC Platinum beat Tenax 6-1 and Ngezi Platinum Stars were 5-0 victors over Bulawayo City.

Mapeza should fully utilise this dead rubber to experiment combinations and come up with a strong side to challenge for honours at afcon.