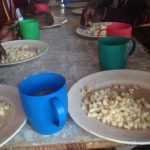 Human rights lawyers have given police a seven-day ultimatum to turn over names of police officers who allegedly tortured students from Gokomere High School in Masvingo.

Police on Monday detained 40 pupils who were later released without charge following disturbances at the school during which windows were smashed, and the headmaster’s vehicle stoned. The Zimbabwe Lawyers for Human Rights said on Wednesday:

On behalf of parents and guardians of some Gokomere students, we have given the Officer in Charge of Masvingo Rural Police Station a seven-day ultimatum to investigate and respond by giving us names of police officers who brutally assaulted and tortured them on November 7 and 8.

The lawyers said the students were “left nursing injuries after they were assaulted and tortured by police officers who arrested them for allegedly protesting against poor diet and learning conditions.”

According to TellZim, a local publication, school authorities called the police after some food stocks disappeared in the dining hall.

Two police officers were deployed to the school where they allegedly used crude interview techniques, including brutalising students.

By then, the students had allegedly destroyed window panes at the dining hall and stoned a vehicle driven by headmaster Acquanos Mazhunga.

Forty students were rounded up and transported on the school bus to the police station where they were held for several hours while being interrogated.

Lawyers stepped in and told police the students could not be interviewed in the absence of their guardians, leading to their release.

Mazhunga and the mission school’s Priest in Charge James Magadzire are currently on bail pending trial over alleged mismanagement at the school after an audit raised red flags.

This illegal treament of suffering children at schools it shows that current ruling party is ruling more beyond the constituion of Zimbabwe .Again, it reaviling undermined of human rights from all angles..

To silence the voice of Justice for the little ones.Jah ah you alone seet