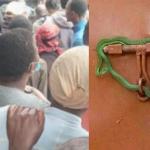 A disgruntled landlord in Kenya kept his tenants out of his property by locking the gate to the house with a snake after they fell behind on their rent.

The incident reportedly took place in the town of Kitui in Kenya and first came to light after Nairobi Governor Mike Sonko posted an image of the gate to Facebook.

In the picture, an average-sized green snake can be seen wrapped around the lock of an orange-coloured gate.

Writing alongside the post, Sonko explained that the landlord decided to wrap the reptile around the lock “after tenants failed to clear September and October rent arrears.”

According to Naija News, the landlord responsible for the use of the snake has been named in local reports as Samuel Kioko, who resides in the Kunda Kindu area of Kitui.

They say Kioko “discreetly placed” the snake on the door after the tenants went to work one morning.

Notice to those who are using bad languages to comment to those who have no morals: Its not even hard to disable your SIM from accessing this service be warned.