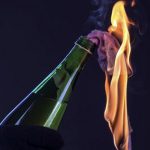 The Zimbabwe Republic Police (ZRP) in Chegutu has arrested a man who torched Chegutu District Lands Offices as he left the premises after inquiring about the state of his application for a piece of land.

ZRP said the incident happened on Monday and the 77-year-old Josiah Garamukanwa was immediately arrested while the fire brigade extinguished the fire. Said police in a statement:

On 22/11/21, Police in Chegutu arrested Josiah Garamukanwa (77) for a case of malicious damage to property which occurred at Chegutu District Lands Offices. The suspect visited the offices inquiring on the position of his application in which he applied for a piece of land.

On leaving the premises the suspect produced a plastic container containing petrol which was hidden in a plastic bag and poured it in the corridor before setting the building on fire.

The suspect tried to escape but the Police officers who were on surveillance acted swiftly and arrested him. The fire brigade extinguished the fire before any documents were destroyed. #notocrime