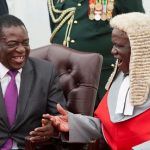 Chief Justice Luke Malaba has bemoaned the lack of funding in the Judiciary Services Commission (JSC) by the Treasury saying this exposed it to judiciary capture.

Malaba added that due to poor funding, the JSC is losing experienced employees who are unhappy over poor remuneration.

He made the remarks during the State of the Judiciary Address (SOJA) in Harare Monday.

The chief justice begged the government to ensure that judicial officers were well paid to avoid corruption. He said:

It is, therefore, important that the government should constantly review the salaries of the workers so that they remain relevant to the prevailing economic situation. The JSC witnessed a high staff turnover in the year under review because of low salaries.

Malaba said the JSC lost a total of 88 members of staff in 2021 through resignations and at least 18 of them were magistrates.

Malaba said human capital is the most important resource in the success of any organisation as such must be prioritised.

Malaba said the judiciary in terms of the Constitution must retain its independence from the other organs as it was unhealthy to seek funding from outsiders because of Treasury’s failure to disburse enough funding.

He too is captured (Malaba)whats he still doing at work whe his tenure expired?

Some of us seem to have one weakness: not being thematic. Instead of commenting on the judiciary's State capture phenomenon, we concentrate on issues of linguistics, unfortunately from an uninformed position. Cambridge guys call it "Majoring in the Minor syndrome"

WE MUST ALL THANK THE CHIEF JUSTICE FOR BEING CLEAR AND PRESCISE IN HIS MESSAGE THAT OUR MAGISTRATES AND JUDGES ARE NOT WELL PAID AND THAT SOME OF THEM MAY BE STATE CAPTURED OR COULD HAVE BEEN ALREADY STATE CAPTURED.

IF MINISTER MTULI NCUBE AND MUZVINAFUNDO MINISTER MAVIMA WERE NOT PRESENT AT THIS FUNCTION, THEY WILL READ IT IN THEIR FAVOURITE STATE CAPTURED NEWSPAPER, THE HERALD. IF THE PICTURE FLASHED IN PINDULA.CO.ZW ADDITION IS NOT A FILE PICTURE, THEN THE PRESIDENT, ED MNANGAGWA, WAS ALSO PRESENT.

YOU THEREFORE MUST BE PERFECT,
AS YOUR HEAVENLY FATHER IS PERFECT. { MATHEW 4:48 }

US$4.00 Harare
Anonymous 4 months ago

Tkt Zudoc and Jambanja..i knew very well what i did mean by Malaba being over the "edge"..as refers to over a position where one falls off..or rather retires!..in.simpler term.. i never intended to use age ye makore emunhu vazukuru...true though that i wrote English language with Cambridge University using paraffin lighting..i suggest we consult our dictionaries on multiple meanings of some of our wording before commenting...blessed night

Sando dzenyu. One can't be over the age.

Your grammar has been so clear and meaningful. I respect your argument.

Kkkk they think they know it all

lack of justice ⚖️.. not funding..mambavha are on the loose

You need to be fired with immediate effect ukuita ma feelings

A real judge with a calling and a conscience would rather resign than become captured. The captured judge is just the same as an extortionist. Would one have a peace of mind and a good night's sleep knowing that they are a judge and are captured? These are the best people to negotiate and get what they are worth. Are captured judges supposed to be forgiven because of the reason of the capture?

Judiciary my foot. In this second republic there is no justice. Our judiciary died a long time ago because now the law only applies to the oppressed. There is a bunch of idiot who calls themselves the ruling party and those mambaras are truly above the law, infact they are above everything and everyone

I went to a day school during cambridge yacho iyoyo. Zvakari dictionary randinaro is giving more than 11 eleven definitions dza edge. Of these 11 definition, hapana kana one iri close to yours