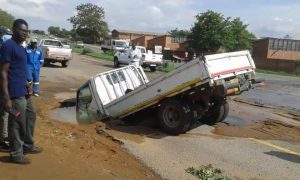 Two people died while fifteen (15) others were seriously injured when a kombi hit a pothole before overturning in Gokwe last week.

Slyvester Hunduza (36) of Mutora stands in Gokwe was driving a Nissan Caravan with 17 passengers on board heading towards Mhumha business centre.

Upon approaching the 700-metre peg from Mutora business centre, he lost control of the vehicle after hitting a pothole.

The vehicle veered off the road and overturned before landing on its side. One person died on the spot and 16 others sustained serious injuries.

He said one of the injured people was pronounced dead on admission at Gokwe North Hospital, raising the death toll from the accident to two.

Insp Mahoko added that three of the 13 victims who were admitted at Gokwe North Hospital were in critical condition and had to be transferred to Parirenyatwa Group of Hospitals in Harare.

Haa overspeed and failed to negotiate a cave.