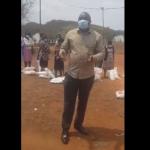 His popularity with party structures in Masvingo Province was reportedly his downfall as a faction aligned to the then provincial chairperson, Chadzamira, recommended his expulsion from the ruling party.

With unconfirmed reports indicating that Chadzamira lost to Mavenyengwa, Zivhu took to Twitter to express his joy over the development.

The former Chivi Rural District Council (RDC) council chairperson ominously warned Chadzamira that he has not yet done with him. Tweeted Zivhu:

(I’m the one who should be taking over as the chairman today, nevertheless, as long as the party supporters have rejected you I’m happy for you. I’m not yet done with you and you will see that I’m not a punching bag as you thought).

Meanwhile, ZANU PF is yet to announce the official results for the provincial elections held on 28 December in spite of having pledged to release them starting mid-morning on the 29th.