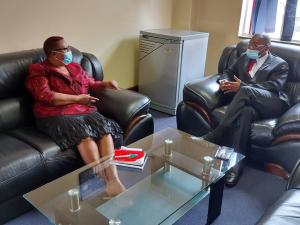 MDC-T leader Douglas Mwonzora has said suspended deputy president Thokozani Khupe is no longer a member of the MDC-T.

Addressing the media in Harare this Friday, Mwonzora said Khupe violated the party’s constitution when she declared a split and her move was rejected by the National Council. Said Mwonzora:

The National Executive completely rejected the declaration of a split, there is no split in the MDC-T.

This is because when Thokozanai Khupe held her Press conference she was accompanied by only two MPs and also after her declaration none of the MPs in Parliament expressed solidarity with her.

We are also happy to note that a hundred per cent of our provinces rejected the call for a split.

Mwonzora also said Khupe cannot use the MDC-T name or the party’s symbols or insignia. He said:

Dr Khupe is no longer a member of our party by virtue of her declaration, we do not know what her party will be called but definitely not MDC-T.

MDC T is a party of the people who follow the law and who have gone to the extraordinary congress.

Therefore, Dr Khupe will not be allowed to use our name, our symbol and our party insignia.

On Friday last week, Khupe held a press conference in Bulawayo where she declared a split of the MDC-T, accusing Mwonzora of violating the part’s constitution.

She claimed Mwonzora was no longer MDC-T president and had automatically expelled himself from the party when he announced that he would contest future elections under the MDC Alliance banner.

WE AWAIT TO HEAR WHAT DOCTOR THOKOZANI KHUPE IS GOING TO SAY IN RESPONSE TO WHAT ADVOCATE DOUGLAS TAGARASEYI MWONZORA HAS JUST SAID. IF IF REPORTERS HAD ASKED HIS VIEWS ON CCC.

Rofana kunzi
The Power Party(MDC) Season;
Season 1-The death of Save
Season 2-The Rising of the Boy(Chamisa)
Season 3-How it Reigned to elections &
splits
Season 4-ConCourt Favour
Season 5-The Battle for the party again
Season 6-The Decline leading to a new
party formed CCC
Season 7-The Drunken remains

U clowns are so irrelevant nxaaa.

Both of you are now irrelevant.

Save, we miss you