Khupe: Govt Shouldn't Side With Mwonzora As They Did With Chamisa Against Me 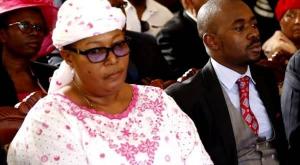 Thokozani Khupe has said the government must not take sides in the MDC-T factional fights like what happened in the past when it “supported Nelson Chamisa” at her expense.

The former deputy prime minister and Makokoba legislator is embroiled in a power struggle with Mwonzora who suspended her for a cocktail of issues including dining with Nelson Chamisa’s MDC Alliance, a rival to the MDC-T.

Khupe, however, held a presser in Bulawayo on Friday where she declared that she was the party leader, on an interim basis adding, however, that the party had “officially split.” She expressed fears that the government would take sides in the matter. Khupe said:

I would like to conclude by emphasising that today the 21st day of January 2022, the MDC-T has two formations.

I am therefore pleading with other political parties; as the MDC-T, I am calling on Parliament, a legislative organ of the state, to desist from taking sides as well as local government, it happened before, and it must not happen again.

At the same time, I am calling on the ministry of Justice to be fair and just in dealing with our matter.

Her spokesperson, Ntando Ndlovu, Friday spoke on Khupe’s remarks and explained what she meant by claims that the government took sides in the past amid claims by some that she meant the government assisted MDC-T to dismantle MDC Alliance led by Nelson Chamisa. Ndlovu said:

The Parliament and Justice ministry should not side with Mwonzora as they did with Chamisa against Dr Khupe in 2018 when she was recalled.

The Parliament has not been fair on how it dealt with the dispute between Dr Khupe and Chamisa. In 2018, Parliament dismissed her letter in which she had notified it to stop considering Chamisa’s intention to recall her, and she was subsequently recalled.

The Justice ministry also went on to allocate funds under the Political Parties (Finance) Act to Chamisa after she had advised that the party did not qualify for the funds. That is the partiality that she was referring to and that it must not happen again in this case.

This comes amid allegations that the state is sponsoring turbulences in the opposition party.

Some political analysts say the ruling party does not create but only capitalises on squabbles in the opposition.

I am of the opinion that Doug and Thoko are really playing their game well. Publicly they're engaged in a warfare but their game plan is rolling out well: distract and decimate Chamisa's formations as long as it keeps on holding dearly to the MDC brand. If he keeps on moving so slowly, he shall come up with a name change when it's too late for people to get used to the new name. That means Chamisa will not be relevant for the 2023 election... simply because of confusion.
ZANUPF will ultimately svasvanga opposition parties. The duo, of Doug and Thoko, are getting handsome kickbacks for the current confusion.

@Mulongoi
Chamisa is a smart dude ,he will obviously change the party name and It will be done on the nomination court date coz if he names it now Zanu pf through its proxies will claim thename
Zimbabwe is one of the fastest growing nation in internet connectivity and by end of day on announcement of the new name everyone from Beitbridge to Kariba ,kanyenba to binga infact the whole Zim including in chendambuya , Dotito guruve will know the new name and slogan

Every contest has a winner and a looser ambuya Khupe. One way or the other, sides will be taken. You can only hope for partiality and fairness. Since your retinue is all Ndebele, I dont see you winning because there is no inclusivity and also your case is weak. You cannot run away from a disceplinary hearing / administrative procedures and claim to be clean. You were the MDCT Vice President when illegal things were being done, now you want to disown everything after participating in the illegalities? Why didn't you speak out then? You were an accomplice. Now enjoy the bitter fruits from your tree of iniquity.

@Mulongoi😂 Either way, kusvasvanga kusvasvanga chete, come with your own ways of trying to decimate ZANU-PF and the concequencies will be dier for you 😂😂😂😂

@Mephistophles YES she was there that is why she chose not to join the illegitimate young-thug but continued to hold on to the initial mdc-t, which even now still is at

@Mephistophles YES she was there that is why she chose not to join the illegitimate young-thug but continued to hold on to the initial mdc-t, which even now still is at

@Jimmaz ZANU-PF already knows,that strategy if mind to know that. But do not care, kusvasvanga zvakadaro wheather waenda kuno register 5min before closure of the nomination court date or what, it wont change the results