Khupe Drags Mwonzora To Court Over Plot To Recall Her 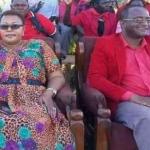 MDC-T co-vice president, Thokozani Khupe has approached the courts in a bid to stop party leader, Douglas Mwonzora from recalling her from Parliament.

The move comes after Khupe had demanded minutes of the MDC-T National Council meeting held in Harare on 26 November 2021 during which she claims resolutions and recommendations were made to expel her and her allies.

Khupe alleges that some tribal remarks were made during the meeting.

In her court papers, she cites the Movement for Democratic Change, Mwonzora, Morhen Komichi (MDC-T chairperson), Purina Mupariwa (MDC-T Secretary-General), The Speaker of the National Assembly, The Zimbabwe Electoral Commission, and the Minister of Local Government and Public Works, in that order, as 1st to 7th respondents.

Meanwhile, Mwonzora has so far denied the allegations that he plots to recall his deputy.

Some reports say Khupe has been having talks with Nelson Chamisa, leader of rival MDC Alliance during which she allegedly proposed that she would like to join the party.

Khupe, who is said has never been fine since her loss of the presidency to Mwonzora at last year’s chaotic congress, denies the allegations.

MDC-T spokesperson, Witness Dube said there were no plans to recall Khupe adding that the party reserves the right to recall individuals who would have joined other parties.