Khama Billiat To Captain Warriors Against Bafana Bafana And Ethiopia 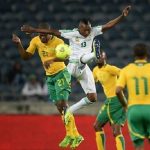 South Africa will host Zimbabwe in a World Cup qualifier at FNB Stadium in Johannesburg.

The Kaizer Chiefs forward will also perform the same duty in the last of the qualifiers against Ethiopia at the National Sports Stadium on Sunday. Said interim coach Norman Mapeza from the team’s base in South Africa:

Khama will be the stand-in captain.

In the absence of Musona, Khama Billiat remains the most senior player in terms of international caps.

Warriors coach, Norman Mapeza has indicated that the match against Bafana Bafana will be an opportunity for Zimbabwe to restore its pride after drawing in the first leg in Harare.

South Africa on the other hand will be seeking to snatch a win and finish on top of the log provided that Ghana loses or draws against Ethiopia in the other group match.

When it comes to disappointment the warriors are the best architects it looks like their tradition .Sometime ago Nigeria came to Zim seeking 4 goals in order to qualify and they did exactly tjat

We always disappoint. I'm advising people not to raise their expectations.

Zimbabweans are a crazy football nation buh not footballing nation... football wise we aren't talented buh we love it so much.