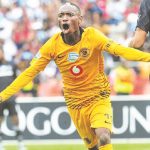 Khama Billiat was at his brilliant best as his brace helped Kaizer Chiefs to an emphatic 3-1 away win over Swallows FC to lift Amakhosi to second place in the DStv Premiership standings.

Chiefs punished sloppy Swallows defending twice in the space of three minutes at the end of the first half to knock the stuffing out of the Birds and set Amakhosi on the road to an impressive win.

Swallows had the better of the possession in the first half, but they had little to show for it, as they were comfortably kept at bay by the Chiefs’ defence.

Instead, it was Amakhosi whose patience out of possession paid off, and who were the more clinical in taking the chances that presented themselves in the first half.

Chiefs were missing key midfield holding players, Njabulo Ngcobo and Phatutshedzo Nange, but they still had plenty of attacking creative firepower at their disposal.

In the 43rd minute, Billiat assisted Keagan Dolly who made no mistake with a smart finish past February to give Chiefs the lead.

Just three minutes later, Dolly passed the ball to Billiat who beat Birds defender Givemore Khupe to the ball and had the ball in the back of February’s net in a flash to double Chiefs’ lead on the stroke of halftime.

In the 53rd minute, Billiat won the initial header and guided it to Parker, who played it back to him.

The Zimbabwean international had plenty to do when receiving the ball on the edge of the box, but with a breathtaking piece of skill, he ghosted past three Swallows defenders before flashing a left-footed shot past February at his near post to score his second of the game with a sublime bit of individual brilliance.

Billiat celebrated with his trademark Cristiano Ronaldo celebration as his goal gave Chiefs a commanding and unassailable 3-0 lead.

Swallows did pull one back in the 63rd minute, as Grant Magerman swung in a cross from the left, which was flicked in the box by Swallows skipper Lebohang Mokoena.

Well done khama buty ndakarwafziwa hankue buty still you are show them the truth kuty a normal worker can not work without sound reward .keep it up