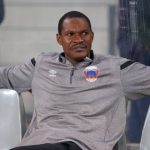 Warriors caretaker coach, Norman Mapeza, says talismanic forward Khama Billiat did not inform him of his plans to retire from international football.

Billiat announced his retirement from international football on his social media pages on Monday but apparently did not inform his boss.

Mapeza said he was still in the dark about the development and was waiting to hear from Khama himself. He said:

I don’t know about it. He hasn’t talked to me yet about the issue.

I’m still in the dark about the issue, we can’t follow what’s on social media.

Because he might end up saying it’s not me, he should talk to us about the issue.

I can’t rush to comment on what’s on social media.

He said they have written to the Zimbabwe Football Association (ZIFA), informing them of Khama’s decision.

R.I.P to our legend lol!

Khama's decision is not very bad and we can't accuse him of his decision, but still there is unanswered question, why in front of the big tournament like afcon? Its not professional look what Zidane did in 2006. He was supposed to give us up to after afcon. I am not saying he is the best or he is in form but his presents in the team so far can give the opponent coach stiff home work

I think what people are saying is true. The old players did their part. It's time for old players to follow suit to what Billiat did. They are tired. That's why they are loosing games all the time. It's time to pave way for young and good players

Khama played his part quite well,I think all old placers should follow suit and give chance to the young ,talented players

I'm sorry for being unprofessional. Coach Mapeza has always been like a father to me. He is the one who brought me to the warriors team and I'm grateful.