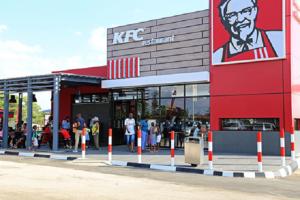 Police are investigating an incident where armed robbers broke into KFC premises in Msasa, Harare, just after midnight on Monday and went away with US$50 000, ZAR 30 000 and ZWL$19 000.

Posting on their Twitter page, the Zimbabwe Republic Police (ZRP) said the six unknown suspects were covering their faces with balaclava masks and armed with a pistol.

The suspects reportedly attacked a security guard who was manning the premises and seized his cellphone before breaking into the offices. ZRP said:

The ZRP is investigating a case of robbery which occurred on 24/01/22 at about 0001 hours in Msasa, Harare, where six unknown suspects who were armed with an unidentified pistol while covering their faces with balaclava masks, attacked a security guard who was manning KFC premises and took away his Itel cellphone before ransacking the offices.

The suspects broke into an office where they blasted a cash safe and stole cash amounting to US$50 000, ZAR 30 000 and ZWL$19 000. Investigations are currently in progress.