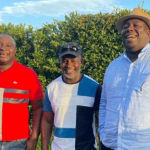 Kasukuwere, Zivhu and Mliswa were pictured together, raising speculation in ZANU PF that the trio could be plotting a comeback.

Kasukuwere, a former cabinet minister during the Robert Mugabe era, is in exile in South Africa along with other G40 members.

He is accused of being behind a court challenge by a ZANU PF youth, Sybeth Musengezi, who has instituted legal proceedings against the ruling party over processes that led to Mnangagwa’s rise to power in 2017.

But speaking to NewsDay on Sunday, Kasukuwere dismissed the allegations as “childish ramblings and conspiracy theories”.

Meanwhile, Mliswa said there was nothing wrong with his meeting with Kasukuwere and Zivhu. He said:

People are coming up with all sorts of conspiracies just because we were together.

I was expelled from ZANU PF by a faction involving Kasukuwere — and if anything, I should not be with him, but there is more to life than politics.

We were not plotting anything, and I will continue meeting whoever I need to. Soon I will post pictures with Chamisa too; he is my sekuru (uncle) just like Kasukuwere or Jonathan Moyo (former Higher Education minister).

The intricate web of totems links us. Now, should I shun that because of politics? No.

Mliswa and Zivhu are both ZANU PF critics but claim they are fully behind Mnangagwa’s “vision”. Added Mliswa:

As for ZANU PF, as a party, it’s clear that it has lost itself and in its current state, it is a rogue entity that is going against the principles of the liberation struggle.

It has been hijacked by a lot of mafikizolos who have no DNA of the party. The ZANU PF I belonged to stuck to the founding principles of the struggle.

Thus on the basis of those principles I have never been out of ZANU PF. The current power holders in the party have kicked out people with the real DNA of ZANU PF.

ZANU PF is never worried about such meetings. By the day end, comrades at Chaminuka building will have the full minutes of what transpired during the meeting. You can ask Tom Elis.

Did you want to say munhumutapa never heard of chaminuka building

ZANU PF SHALL ALWAYS WORRY AS LONG AS IT HAS PERCEIVED POLITICAL ENEMIES OUTSIDE ZIMBABWE.

THE MEETING OF CAMARADAS SAVIOUR KASUKUWERE, TEMBA MLISWA AND KILLER ZIVHU WAS A CONVERGENCE OF GREAT MINDS. THESE ARE THREE YOUNG AND EDUCATED FORMER ZANU PF CADRES. THIS WAS NOT A MERE MEETING OF DOWNING JONNIE WALKER/JONNIE WOFAMBA MANJI.W

FOR ZANU PF MEMBERS TO LIVE PEACEFULLY IN THEIR MINDS IN ZIMBABWE, IT MUST MAKE A PEACE AGREEMENT WITH ALL THESE GENTLEMEN WHO ARE LIVING OUT OF ZIMBABWE SO THAT THEY COME BACK HOME. THEY MUST CONVENCE THEM THAT "EAST OR WEST HOME SHALL REMAIN THE BEST".

TEMBA MLISWA YOU ONCE REMARKED THAT PRESIDENT ED MNANGAGWA IS YOUR UNCLE. TODAY YOU HAVE ADDED ONE NELSON CHAMISA AS YOUR UNCLE TOO BY YOUR TOTEMS. WHAT IS YOUR TOTEM CAMARADA MLISWA ? YOU COULD BE MY NEPHEW TOO. I AM OF THE TOTEM TEMBO MAZVMBAKUPA.