Kasukuwere Speaks Of Need "To Steer ZANU PF Back On Course" 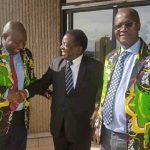 Exiled former ZANU PF national political commissar, Saviour Kasukuwere, has said there is a need to steer the ruling ZANU PF back on course.

He alleges that the party’s current leadership has failed to solve the chaos that prevails in ZANU PF.

Kasukuwere speaks when he is being accused of sponsoring a ZANU PF member, Sybeth Musengezi, in challenging President Emmerson Mnangagwa’s ascendancy to the party’s presidency following the ouster of the late leader Robert Mugabe in November 2017.

But Kasukuwere said accusations against him are scapegoats by a leadership that has failed its mandate. He said:

The accusations against me are hallucinations from ignorant characters that have no interest of the party at heart.

Arguing about an obvious absurdity is indicative of serious lack of emotional intelligence on the part of those who should lead the movement.

Scapegoats are not the solution, but rather the solution is tackling the core political question of the day. Political maturity and wisdom is urgently required to steer the party back on course.

Kasukuwere who was fired from the party in 2017 together with other party members who were alleged to be members of the vanquished G-40 faction, has indicated that he wants to contest the 2023 presidential election.

He previously pushed the #TysonWabantu campaign which flopped after close associates including Professor Jonathan Moyo distanced themselves from it.

There are reports that suggest that G-40 remnants in ZANU PF are preparing for his return.

He was here why didn't he do his so called Noble ideas how come now .Kasukuwere is a bogus political dinosaur who only belongs in a meusium .I wonder what he could do now he is in political wilderness .We need a search and rescue team to bring him back home .Trust me I support Mdc Alliance but Kasukuwere ,Lio Mugabe,Jona wema gogorosi Moyo ,These are the west pple Zanu pf ever produced not forgetting Water Sorry Walter Muzembi.We need pple like the hardest working Mp Chinoz ,Sedney the nobleman Sekeramayi ,Kersty the Olympian Coventry,who is Kasukuwere pliz SOS to the govt to save us from him.🌵

@Elyse,so u too are enjoying cush life in zanu?u blessed if it's so...

@predator if this was the thinking of all pple in Zimbabw then my country could have been miles better!
Imagine pple sympathizing with Jonathan or saviour, only because they chased out Zanu Pf.if they weren't chased they would be there singing the same song.Now chikara chakutuka muchero nezvausiri nekuti hachichausvikiri makuti chaka repenta..imi kaimi.
The greatest sign of lacking ideas by the Alliance team was giving jonathan a soft landing pad inorder for him to continue confusing Zimbabw as if he is the last best thing to happen to this country.
As for Tyson those who have tears for him you can to Mash central and hear about him during his time in power...kkk he had turned to a demi-god there
He was one of the most corrupt officers ever..he misses his cush life inside Zanu Pf that's why he will try to get in one way or the other

SAVIOUR KASUKUWERE IS A GROOT HOND.
HE IS A BIG NINICOMPOOP, A STOOGE,AN IDIOT, AN INDOLENT AND INDUSTRIOUS GAOLLER.

HE MUST REMAIN QUITE BEFORE WE FOLLOW HIM THERE.

HE IS IN KENYA,SO HE MUSTN'T TALK TOO MUCH.