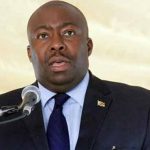 Former Local Government minister Saviour Kasukuwere has challenged the country’s leaders to put aside their egos and work together for the betterment of Zimbabwe.

The self-exiled former ZANU PF political commissar told NewsDay on Wednesday that Zimbabwe has been hamstrung by sanctions and polarisation and the issues require wisdom and maturity to handle. Said Kasukuwere:

People must unite and deal with common challenges. No individual can be bigger than Zimbabwe.

These issues require wisdom and maturity to handle so that we give a new era to the people of Zimbabwe.

Kasukuwere left the country in 2017 following the military coup that ousted the late former President Robert Mugabe and is currently in South Africa.

He came back in 2018 but left the country again for South Africa where some former G40 members, including former ministers Walter Mzembi and Mugabe’s nephew Patrick Zhuwao, are based. Added Kasukuwere:

It must never be about an individual or opposition, but it is about the survival of the people of Zimbabwe.

No individual is greater than the nation. We need to admit that and ask ourselves tough questions before we do the right thing.

The rule of law and property rights should be protected. We need a better country for every Zimbabwean.

Kasukuwere has been accused of being behind a court application by ZANU PF activist, Sybeth Musengezi to challenge President Emmerson Mnangagwa’s rise to the helm of the party in 2017.

Mnangagwa was fired from the posts of State Vice President and ZANU PF vice president but bounced back in the aftermath of the military coup.

US$0 Harare
Cde Bargah 5 months ago