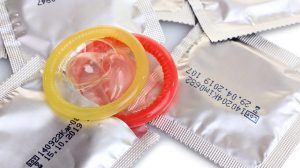 Six (6) imbibers in Karoi were left stunned after they found three condoms at the bottom of a beer container popularly known as a “scud”.

The men have since reported the matter at the Delta depot in Karoi and investigations are underway. Musakambeva told NewsDay:

I was taking my last sip when I came across an open condom inside.

We found out that there were actually two more condoms in the scud.

We went to report the matter to the police, who referred us to the hospital.

Their medical report dated 19 January 2022 indicates that the men were referred to Delta via the police.

Mahwande said one of the condoms had been opened, while the other two were sealed.

In a written response to NewsDay, Delta general manager for corporate affairs Patricia Murambinda confirmed that she received the report last Friday. She said:

The said product sample was only left yesterday (Thursday) at our Karoi Delta distribution centre for further analysis in Harare by our quality control department.

We haven’t had such cases. For now, I can’t comment on anything until the full process of investigation has been done to ascertain the contents of the pack.

Someone dropped them in while they were drunk

Report Abuse
Someone somewhere 5 months ago

Mmmm taurai chokwadi varume , your story does not check out

I DO NOT BELIEVE IN THESE GUYS STORY. THEY SHOULD HAVE IMPLANTED THE CONDOMS. IF THEIR INTENTION WAS TO LATER ON CLAIM MONEY FOR DISCOMFORT FROM DELTA, I WANT TO GIVE THEM HELP FOR FREE.

THEY SHOULD STOP THEIR SHENANIGANS IMMEDIATELY. IF THEY GO AHEAD AND POLICE FORENSIC DEPARTMENT GETS INTO IT THEY WILL FACE SERIOUS PROBLEMS.

CID FRAUD WILL BE INVOLVED. IF THEY ARE PUT IN A TIGHT CORNER BY CID FRAUDS, ONE OF THEM IS LIKELY TO SQUEAK. EXPERIENCED CRIMINALS COMMITS CRIMES SINGLE HANDEDLY. IF MANY ARE INVOLVED, ONE IS LIKELY TO SACCUMB TO INTENSIVE AND SUSTAINED QUESTION BY POLICE AND SPILL THE BEANS.